For more up to date information about me, please visit my new web page at www.kbecan.com 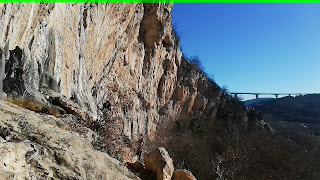 We all know the most important thing in life is a good belayer. Without it, life would be hard and painful, they are the ones that catch you when you fall before you hit the ground so you can try your project one more time.

I was lucky enough to have chance to meet the Worlds best belayer who takes his job seriously. We should all learn from him and follow his examples to make a world a safer place. Watch the video carefully and learn from the Master

Some times in order to progress only climbing around is just not enough and we need to put more energy into more specific training. Luckily I know how to combine training and climbing at the same time so it doesn't get boring and you can progress even more.

All the training camps are made specifically for a person or a group, depending on the area you want to improve. May it be lifting your onsight or redpoint limit, improving technique, get better with knee bars or heel hooks or just improve general performance. Focus is usually on the climbing technique but at the same time we will do something with the power, endurance and the mental thing.

So if you want to improve, contact me and we will make it happen :)

Video from 8c project I climbed in Kalymnos on Evolvs Kalymnos Climbing Festival 2017.

Nothing is perfect and everyone has a chance to improve. Normally we think our weakens is power but we are wrong. We can climb much harder things with the right technique and a good mental preparation. Also we always need more power, but remember, power is nothing without control. If you want to improve in all three essential things in climbing you can join me on Coaching Climbin Trip in Spain or anywhere else around the world. More info @Rockbusters or contact me at kbecan@gmail.com 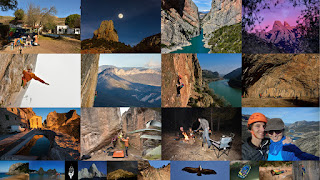 “Bluearow” saw the road for the first in a small city of Berlin in year 2000. Since than he was driving around with a German owner for 8 years until he realized he needs more adventure in his life. So he decided to change the driver and came to Slovenia in year 2008 with 177.000km under his tires. New owners were nice to him and were keep upgrading it and changing all the necessary things to drive them around safely and without a problems. He travelled all over Europe. From El Chorro near Malaga in Spain and all the way to Antalya in Turkey. Few stops in Germany, France, Italy, Croatia, Sardinia and so on. Driving in snow, sun and rain or just resting for a few days in Dolomites or Durmitor. There is not many European countries he hasn’t seen and he wants to see them all. He’s dreams were also to drive around Mediterranean Sea but for this he needs a new driver, someone who will share good and unforgettable moments with it.
As a hippie van as he is he likes to drive slow, especially when there is lots of things in it. Not that it can’t go faster, but like this it uses only 7,5l of diesel per 100km and can do much more kilometers with a full 80l tank (around 900km). Although he’s a hippie by heart he doesn’t like smoking and his owners were nice enough to respect his wishes. In return he allowed them to cook inside in a small but useful kitchen and when they were not too lazy to change it in living room they could also use a foldable table. Bedroom is nice and big and equipped with curtains so people from the outside can’t see what’s cooking on the inside.
If you want to make lots of kilometers with a car it has to be also comfortable for driving. “Bluearow” is prepared for this with electrically heated seats (most useful after ice climbing), air-condition (in Spain) and cruise control (anywhere and anytime). Bunch of 12V plugs and a 2nd battery can make sure you can charge most of the things and for the rest with 220V converter works also the mixer, computer and washing machine (last one not tested J). Radio with USB, Bluetooth and CD can help you learn some new language on the way or take care for the roof party in the middle of Barcelona. For safety he is equipped with gas alarm so you can sleep without a fear also on French highways or beaches in Barcelona.
Hippies that are traveling/living in it like it a lot. They put lots of love in it but unfortunately they decided they want to change it. Decision was hard but after all this years is time to get something different and bigger. So “Bluearow” is searching for the new owner. Someone who will travel with it even further and spent some great time in it, he knows how to make the trip interesting. At the moment he has only 460.000km (not even half a million) and is ready to try and go to 1.000.000km. Lots of stuff has already been changed and at the moment it dives perfectly. He passed the Spanish ITV without a problems (17.3.2017) but to register it here to the owners just sounds too complicated and they gave up even before they tried L.
So if you are interested to offer this amazing Multivan, 2,5TDI, 102cv, 205/R65/15C, “Bluearow” the future it deserves send your CV and future traveling projects on kbecan@gmail.com or contact +386 40 233 225 on WhatsApp.