When everything goes wrong

I woke up in a nice sunny morning in Drašnice. I was feeling good and strong after (forced) rest day. Skin was back on my fingers so I skipped morning swimming in the sea and went directly to my project.

From the parking I could see it's more wet than rocks on the bottom of the sea. Anyway I went up optimistically. But closer to the wall I got, the worst it looked.

Since I was already there I decided to try it like salmon and swim up the tufas. Impossible to get to the first belay so I just took out the quickdraws and went back home.

We stayed one more night in Drašnice, woke up in another nice sunny day, took a swim and drove back home to Slovenia.
Avtor Klemen Bečan ob 13:37 1 komentar:

After two weeks of traveling, climbing, surviving thunderstorms, driving and bunch of other staff we finally came through the tunnel and on the other side we saw Spain.
Bielsa was our first stop in Spain. Perfect "warmup" place with big overhangs, tufas and long routes everywhere. I already got into a bit better shape so I could successfully onsight two 8b's and one 8b+. Good start but my plan was to onsight also something harder :). Another place close to Bielsa is Devotas where we were enjoying super nice easier routes mostly graded from 6a to 7c.
We continued our way to Basque country where we stopped in Etxauri. For 5 minutes, just to see the place and put it to out winter itinerary. Hope for climbing will be as awesome as it looks on the sun. Now it was just too hot and we continued to another place called Lezaia. I can't say much about this place since I didn't use "LifeStraw" and we got water poisoning. Not fun at all and also artificial holds in all the routes didn't help to put us in a good mood. Anyway, from far it looks nice and it's in the shade almost all day. 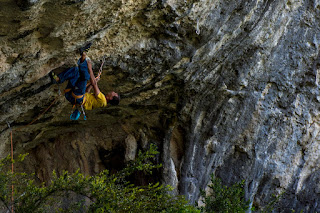 In Oñati we were climbing most of the time in Korea sector where you can find many nice and long lines Climbing is similar to Bohinjska Bela or La Balme with grey rock and many long sharp tufas. Here they added also some artificial holds so on sighting was a little easier. I did Simonides 8b+ os, but for famous Honky Tonky the conditions were just not good enough :).
My favorite climbing spot on the trip was La Hoya in Egiño. First big cave  La Leze you can see from the highway and you are crazy if you don't wanna climb there. Yes, it's a little bit dusty but the routes are amazing. Without a topo I can't say what I was climbing but the hardest around 80m long (maybe less but when you climb it feels long) was definitely the 9a Dani Andrada did. I was happy just to get to the top on A0 and also getting down was not as easy as one might think. To climb this route I would need much more than two days so we went to find something else. We found in on the other side of the mountain after 3 hours of walking on rain (normal approach 45-60 minutes). Long walk but it's worth it. La Hoya is a climbing paradise with long and hard routes. There is one easy 6c BS route all the way on the right but anything else is ... fun to climb. Without a topo I had no idea what I was doing but I knew I wanna get back as soon as possible.


Routes in La Hoya were long but we wanted to climb something even longer. And Picos de Europa are prefect place for this. 3 hour approach and we had a nice view on foggy sky. No, we didn't see anything. So we looked on the pictures from guide book and say "that's a nice wall" :). Next day one easy route. Sky cleared for 5 minutes so we could see the wall and we could find the route. Also on the top was just fog everywhere so we went down. Nothing to see there :(. Third day we woke up in a nice sunny day and from the tent I saw the route I wanna do, It was Murciana 78. This time the weather was perfect and from the top we could enjoy the view all the way to Atlantic ocean. There was one more  route I wanted to try there before I went back down to the crazy world. It was route Orbayu 8c (8c+) which looked just amazing. First there are three overhanging 8a pitches that Anja liked the most (she hates overhangs and traverses so this was perfect for training :)). Than you have super comfortable hole/ledge where you can have a BBQ and from here on it gets hard. On my first try I was feeling strong and I came quite high but than I broke a small krimper. Joder. On 2nd attempt I fell even lower and it's hard to do 2 tries in one day in this kind of route. So I will have to get back there and finish what I started, but this will have to stay for my next trip. When we came down from the route Klemzy and Tanja were waiting for us with fresh supplies of beer so we could easier walk back down to the valley. Thanks again for helping us carry all the stuff down. More of this mountain you can read on Anjas blog.


From here we continued our way to Teverga. It's just another place with too many rocks, cool routes, big potential and friendly people. Every day we were climbing in different sector and we still didn't visit all of them. For me the best one was Planeta X and Placas de Sol where I did second ascent of 45m vertical monster The Flintstones 8b+. I have no idea why others don't like to climb this route.


We stopped one more time in Poo de Cabrales where I saw a route in a topo. No bolts in it so I tried it on trad. Impossible and too dangerous so I added a few bolts and I hope nobody will get angry at me. It turned out to be nice and hard 7c and I called it Mi Cabra es tu Cabra.
In Rumenes it was raining again. Everything was wet and also close to where we were sleeping at night we heard a huge land slide. Everything was wet (still) so we decided to leave and we found a new spot Ramales where it's possible to climb in rain. Wall here is so big that rain never gets through so it never gets wet. Also because of this there will never be tufas on this wall so it makes it perfect for changing a style. Orange wall with small holds and technical cruxes will throw you off as soon as you loose a bit of concentration. Luckily I like flying so I was not too disappointed when I fell on last hard move of 8c.


For rest day the best place is Cabo Ogonyo. Morning bigwall climbing on perfect tower above the see and swimming in the ocean in afternoon. It's also good to by fish for dinner here since they are much better and cheaper than in Slovenia.


I still wanted to on sight something hard. So I convince Anja to go back to La Hoya where routes are perfect for this. Now there were some people there so I could finally figure out what I was climbing last time. 7c i tried for warm up was 8b, 8a I did was also 8b and 8a+ they also said its possible 8b+ to the second chain and third pitch where I fell supposed to be 9a. Aha, so this is why I was so destroyed next day. They recommended me also a nice 7c for warm up. No problem but it was fucking hard. When I was hanging on the rope I told them it's hard for 7c and he replayed: "Porque no es 7c, es 9a". Yep, I went to the wrong route, the 7c was more to the right. But it was a good warm-up :). In 8b+ they recommended I didn't see some holds in the crux so I fell. But it was a good try and I was ready to on sight 8c. This time my approach was a bit different than normal and I took some time to observe route from the ground. There was not much to see so I went for it. First section was much easier than expected. Good rest but I didn't need it and I continued up. Few hard moves and another rest. From here on it looked much harder so I was relaxing. Few meters higher I missed some holds again and I was too much on the right to continue a murte so I decided to downclimb back to the rest (usually big mistake but this time it payed off). Anja was even making fun of me: "Klemen, you have to go up, not down, ha ha ha". But I knew what I was doing. I went back up and do the crux. On the limit, but I was on a better holds again. Now I could see the chain. But there was still a blank wall between me and a tree from where you clip it. I was getting more and more pumped so I decided to jump and hope for the best. With the help of a big scream I grabbed the hidden hold and I finished the route. Wiipiii 8c on sight and now I'm ready for 8c+. No. I was out of energy so I packed my staff and go back to the car.
Not just back to the car, we started to drive back home. We stopped in one more area by the road, than in Abella de Conca where it's always nice to spent some time and in Perles we finished with our Summer climbing trip to Spain.
In total I onsighted 5 8b's, 48b+'s and for the finish Bongo X 8c. I know it's not totally  as I wanted by my plan to onsight 9a I have for the last 10-15 years so a year up or down is not a problem :). I'm not in a hurry, I still plan to climb hard for a while :)


The Book of the trip which helped us a lot to organize and find many amazing places was Donde Escalar from Desnivel and I recommend to have it always in your car. You never know when you have to change your plans and find a new place and this book is full of ideas.
Thanks everyone for sharing good times in Spain. See you soon
Avtor Klemen Bečan ob 14:20 1 komentar: